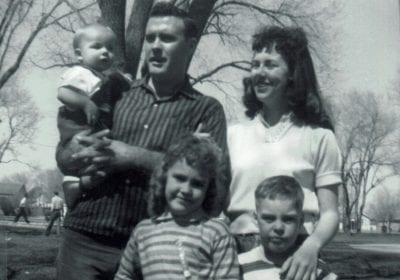 Jesse Myrl Fullerton was born in Lubbock, Texas on November 19, 1931. He was the oldest son, and second child, of Jesse James and Gussie Mryl Hardy Fullerton, both deceased. His siblings include elder sister, Elna Clark, his younger brother, Bobby Fullerton, and his younger sister, Shirley Crump, and his youngest brother, Jimmy Dale Fullerton, who is now the only one who is still with us. Jesse attended Lubbock High School, home of the Westerners, from where he graduated in 1949. While in high school, he played baseball, and according to him, “Whatever sport was in season.” Although he played other sports, his true love was baseball. He was known for his great talent and was written about in the local newspapers. His son, Keith, remembers fondly the passion for sports when he watched games with his dad.

In 1951, he received a letter from the Brooklyn Dodgers asking him to join their ball club. The letter was dated March 12, 1951…the very same date he eloped with a 16 year old named Edna Mae Belk. He never did live out his dream of playing professional baseball. Somehow, he ended up not going. Instead, he went to work to support his new wife. Together they had five children, Cynthia Ann, Bill Lynn, Gary Mack, Keith Ward, and Melanie Lorene. Jesse and Edna suffered great heartbreak when Gary, at the age of 5 months, died due to complications of Spina Bifida. They never recovered from this tragedy. For the next several years, they moved around quite a bit, living in Lubbock, Tucson, AZ, Kansas City, MO, Loveland, CO, and various places in and around Los Angeles, CA.

Jesse’s chosen profession was a sheet metal worker, although he also worked for the railroad, managed fast food restaurants, and did other jobs. His talent with sheet metal is legendary to this day in Tucson, as many of the buildings there house his designs. He loved to drive around Tucson and show us the buildings that hold his sheet metal. He was very proud of his work, and with good reason.

Jesse loved the Lord, and when his kids were younger, he took them to church. His son, Bill, remembers holding his hand and looking up at his dad as he sang hymns. It made Bill feel calm and secure because his father was with him in church, singing. Jesse prayed with his family, too. He was quiet about his faith, but he was a believer.

Throughout the years, he was known for his joke telling. He seemed to have a corny joke for every occasion. He would laugh so hard at his own jokes. He even submitted a joke to Reader’s Digest once, and they published it. He was very proud of that. He also liked to write letters to the editor of the local paper, and many of them were published. He also wrote poetry; very short, often humorous ones. He and Melanie exchanged many letters through the years as they lived very far apart for several years. He often included a copy of his letter to the editor.

In 1971, Jesse and Edna divorced while living in California. Jesse moved back to Tucson, where he married Pat Hobbs, but it only lasted 6 months. Sometime later, he met Josephine at a Johnnie’s restaurant. He went there every day for coffee, and over time they fell in love, running off to Las Vegas to elope.  Jesse and Jo lived in Tucson together until she passed away in 1998. Around the same time, due to his needing to care for a very ill Jo, he retired from working. Losing Jo and his job at the same time stole his zest for life. He started to get withdrawn and preferred to be alone. His son, Bill, and his two children lived in Tucson, and they tried to get him involved in various activities, like baseball games and such. It was just too difficult for him without his wife or a job to go do.

In 1999, he moved to Texas to live with his daughter, Cindy, and her two teenage sons, and near his daughter, Melanie and her family, and son, Keith, and his wife, Colleen. Cindy’s home was a hub of activity with teenagers running around. They made Jesse a welcome part of the home. They were so glad to have him nearby so he could enjoy getting to know his grandkids better. He would often go to the local baseball fields and watch the kids play. He babysat his youngest grandkids, which was such a delight for him and them.  He endured watching the movie “Tarzan” several times a day when he looked after Emily and Jacob. Cindy encouraged him to go back to work in some capacity, but he chose not to do that. We all made sure he hung out with the family when we got together. He went to movies and out to eat with the family. Jesse lived with Cindy for the next 6 years, slowly growing more and more secluded by his own choice. In June of 2005, Jesse fell at a gas station while pumping gas, and broke his hip. Since Cindy’s house had stairs, he moved in with Melanie and her family for a year while he recovered. During that time, Melanie and her family grew closer to him. Emily supplied him with lots of books to read. She and Jesse would discuss the books together. Jacob became proficient at handling the wheelchair and was always eager to help his grandpa. Christmas was especially touching when they did an advent calendar activity and Jesse opened up with thoughts and feelings about his life, and even was brought to tears. It was very touching. He decorated the tree with them, and said he had no memory of doing that in the past because he was always working when the tree was decorated. When Cindy moved into a 2 bedroom apartment, he moved back in with her, as her sons were grown by this time.  Later they moved into a house where he lived until 2016 when Cindy married Terrence Schenkelaars. Jesse then moved in with Melanie and her family. He was happy there, although he kept to himself most of the time (as he did at Cindy’s, too). He was always greeted by those who visited and was a welcome member of the family. He lived with Melanie, Brett, and Jacob until he went to be with the Lord on Thursday, March 21, 2019.

Jesse was a quiet man for the last several years of his life, feeling more at ease alone than with others, but he still told the occasional joke, enjoyed reading, liked to watch television shows, movies, and sports, truly loved sugary treats, especially chocolate shakes and candy, adored his little great-granddaughter, Genesis, and lit up when she came into his room to talk to him and show him her toys. Jesse’s children treasure the memories they made with their father and will forever remember the love they shared. Most importantly, he never hesitated to say, “I love you.” Melanie was grateful that those are the last words they spoke to each other the day he died. He was a good man of great character and he will be greatly missed by all those who know and love him.

To order memorial trees or send flowers to the family in memory of Jesse Myrl Fullerton, please visit our flower store.