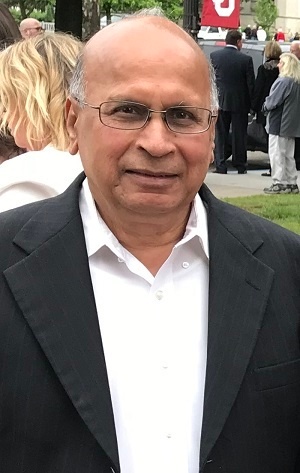 Dr. Narayan K. “NK” Mahale of The Woodlands, Texas, passed away on September 7, 2021, at the age of 74. NK was born on March 26, 1947, in Karwar, India, to Krishna and Radha Mahale. He married his wife, Hema, on January 15, 1985, in Bombay, India. He received his B. Tech. in Civil Engineering from IIT Bombay in 1969. After graduating from IIT Bombay, he came to the United States for graduate studies. He went on to receive his M.S. in Aeronautics from Caltech in 1973 and his Ph.D. in physics from Caltech in 1984. In addition to his love of science and mathematics, he also loved finance, cooking, working in his garden, and reading books. He is survived by his wife of 36 years, Hema, their two sons Vivek and Dilip, and numerous brothers, sisters, cousins, nieces and nephews in his birth country of India. He was preceded in death by his parents.

To order memorial trees or send flowers to the family in memory of Dr. Narayan K. "NK" Mahale, please visit our flower store.